Olivet Nazarene University invites you to experience the majesty of the 125-rank Ruffatti Pipe Organ during the Ovid Young Memorial Organ Recital Series in the Betty and Kenneth Hawkins Centennial Chapel.

Monday, April 3, 2017 — Matt Gerhard ’08 is director of music at Kokomo Zion United Methodist Church in Indiana, as well as being an accomplished organist, pianist and conductor. He began studying organ with William Brown on a three-manual Austin pipe organ when he was a freshman in high school. While a student at Olivet, he studied organ with Dr. Timothy Nelson and traveled with The Olivetians ministry team. He also studied organ with Dr. Beverly Howard at California Baptist University. The music of the Church has always been important to him. 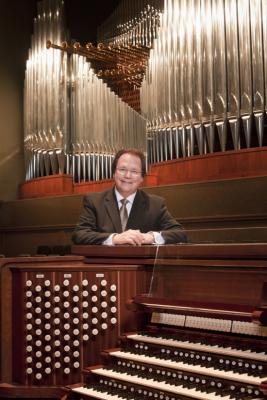 This recital series honors the memory and musical career of Dr. Ovid Young ’62 (pictured left), who passed away in 2014. An Olivet alumnus, he is remembered by many as a beloved performer, teacher, mentor and colleague. A pianist, organist, composer and conductor, Dr. Young had to his credit more than 7,000 performances in major concert halls, churches and colleges around the world.

Olivet’s Ruffatti pipe organ — custom built and installed by Famiglia Artigiana Fratelli Ruffatti (Ruffatti Brothers, Family of Artisans) of Padua, Italy, and Marshall & Ogletree of Boston — features a four-manual console and a concave pedal board with 32 notes. It has 125 ranks: 75 ranks of wind-blown pipes and a digital component of 50 additional ranks.