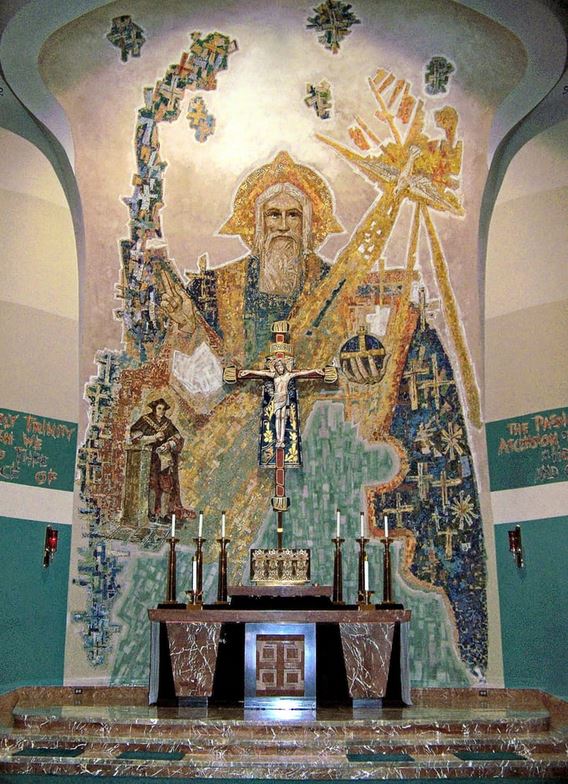 St. Thomas Church’s Rodgers Organ will be dedicated on July 24 at 10AM.

The Musica Pacis Choir will be singing the following selections:

St. Thomas church has housed two Allen electronic organs in this magnificent worship space over the years, however Rev. Scott A. Haynes determined that the time had come for a significant upgrade to the sound in the room.  The new Rodgers Inspire organ has provided that significant change and will allow for this wonderful choir to grace this sacred space with some of the finest choral music ever written.

Musica Pacis was established in 1987, when Fr. Willard Jabusch and Fr. Alec Wolff embarked on a project called, “Willard’s Other Adventures in Music.” Prior to that date, Fr. Jabusch received his doctorate in performance studies from Northwestern University. His works are well-known in parishes across the country: Whatsoever You Do, The King of Glory, and many others.

Shortly after the establishment of Musica Pacis, Fr. Jabusch and Fr. Wolff were present to watch their operetta “Francesco,” about the life of St. Francis of Assisi, staged at Orchestra Hall by the Chicago Symphony Orchestra, with Sir Georg Solti conducting.

Today, Musica Pacis is under the leadership of Fr. Scott Haynes, an accomplished conductor and organist, and, most importantly, a composer of sacred music in memory of those who have gone before him. Fr. Wolff continues on the board of directors, and Musica Pacis involves laity, seminarians, and any who believe that the worship of God is aided through the beautiful gift of music.

Rev. Scott A. Haynes has a career in sacred music spanning three decades. He has made numerous recordings for the Sony Masterworks label.  As an organ and choral scholar at Washington’s National Cathedral from 1994-98, Fr. Haynes studied under the tutelage of Dr. Douglas Major, Organist and Choirmaster.  Fr. Haynes completed choral conducting studies at the University of Alabama under Dr. Sandra Willets, complimented by post-graduate studies with Dr. James Jordan at Westminster Choir College, Princeton, New Jersey.  Having studied composition under Dr. Frederic Goosen, he won the American Society of Composers and Arrangers’ Raymond Hubbell Award for orchestral composition in 1992.  Ordained in 2007 for the Archdiocese of Chicago, he served as Prefect of Liturgy and Music at St. John Cantius Church in Chicago from 2006-2019, directing the parish choirs and orchestra.  As composer, arranger and  editor, Fr. Haynes’s work has written a wide range of liturgical music, which is available through Ignatius Press, St. Benedict Press, and  Musica Pacis.