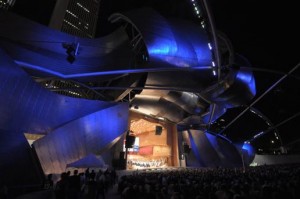 It’s spectacular, it’s thrilling, and it’s free! Lyric Opera kicks off the 60th Anniversary Season with a fun, outdoor, family-friendly event – and you’re invited! Bring your friends and your picnic basket and relax under the stars as many of Lyric Opera’s most acclaimed voices provide you with a sampling of scenes from your most beloved operas. With the renowned Lyric Opera Orchestra and Chorus performing an array of showpieces, Sir Andrew Davis conducts this annual iconic evening featuring stars from the 2014-15 Diamond Anniversary Season.
Get a taste of next season with highlights including the overture from Tannhäuser performed by the Lyric Opera Orchestra, the Act One finale of Tosca featuring Mark Delavan and John Irvin, and the final scene of Don Giovanni with Mariusz Kwiecień, Marina Rebeka, Ana María Martínez, Antonio Poli, and Andrea Silvestrelli, and more! Also included are selections from Macbeth, Rigoletto, and Iris.

Plus, enjoy a pre-concert performance from 6:45pm – 7:10pm given by members of the United States Air Force Band of Mid-America. Don’t miss a single word of this year’s concert!

For the first time ever, you’ll be able to follow along with line-by-line translations in real time by visiting lyricoperalive.org on your mobile device or online during the performance. (Link will be live on September 6.)

The Lyric Opera Broadcast airs this event live on 98.7WFMT and WFMT.com beginning at 7:15pm.